What I Learned From My Daughter About Decision Making

She’s eleven years old and has been precocious for as long as I can remember.

At five, she told us, “It’s time for me to start learning how to play violin.”

And now, at eleven, Claire — our oldest of three children — has taught us a lesson in perseverance and decision-making.

First, the background of this story.

Those who want to participate in this voluntary activity must read what seems like a thousand books in order to qualify for the one-day trip to Nanaimo, British Columbia where BookFest occurs. This extravaganza — billed as the “Vancouver Island Children’s Book Festival” — not only is a big deal for those students who qualify by reading the requisite number of books, it’s a chance to meet some of the authors they actually read in person!

As an author and a lifelong proponent of reading, this was a remarkable opportunity for Claire.

Part two to the story takes us to another remarkable event on Vancouver Island, the 6th Annual Butterfly Ball. The ball is “an enchanting evening for dads and daughters in support of children and youth through Children’s Health Foundation of Vancouver Island.” What isn’t there to like? A good cause, a good night, and quality time with the up and coming violinist. 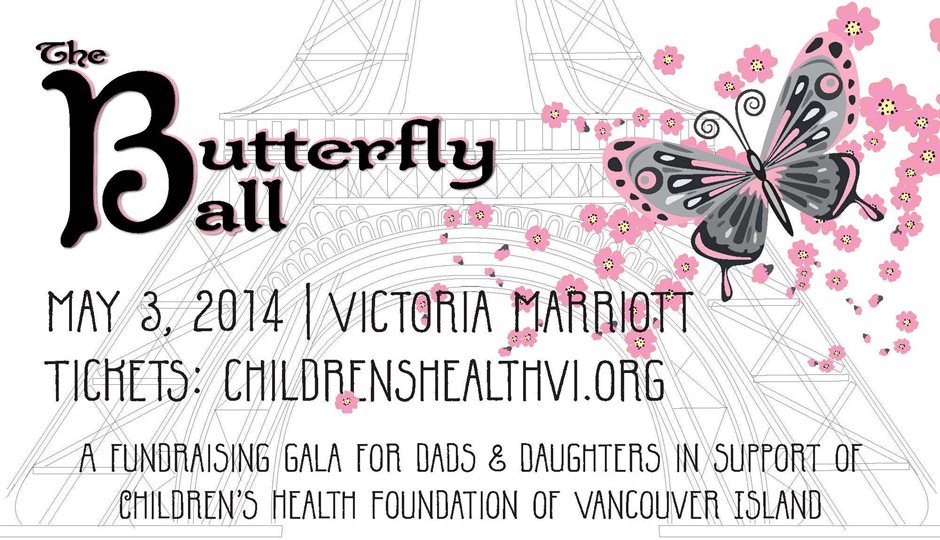 Tickets for the Butterfly Ball were purchased in late 2013. Claire and I were stoked for a ‘grown-up’ night out.

The story takes a sharp twist because in late January the date for BookFest was announced.

Why the issue, you ask? Shouldn’t a ‘ball’ be happening at night, and shouldn’t a ‘bookfest’ happen during the day?

You are correct my young mathematician, however, the school bus Claire was taking to Nanaimo for BookFest and returning to Victoria on had her pencilled in to arrive at some point around 8:30pm. Sadly, the Butterfly Ball ended roughly around 9:00pm, so therein lies the dilemma. She could not attend both events.

For several weeks, Claire laboured over the decision.

I even looked into float planes and airlines to shuttle her from Nanaimo to Victoria in time for the Butterfly Ball.

One night, while traveling in March, I received a call from Claire on my mobile.

“Dad, I don’t know what to do. I want to go to both events, but I can’t,” she whimpered, clearly on the verge of tears.

I received an email the next day from her as well indicating the difficulty she was facing. It was heartbreaking, but she was figuring it out.

By mid-March, after thinking about the pro’s and con’s, Claire made her decision and let us know over dinner.

She chose the BookFest, and her rationale was something I’ll never forget.

Mom, Dad, I’ve worked really hard reading those books and I want to complete my goal. It’s my only chance to be a part of BookFest in Grade 5. I want to meet the authors too. I don’t want to disappoint you Dad, but can we go to the Butterfly Ball next year?

What you don’t know is that some of her very close chums were also going to the Butterfly Ball. As you can imagine, there was probably some pressure in her circles to choose the Butterfly Ball, let alone thinking she might disappoint her Dad. In the end, Claire chose perseverance. She stuck with her goal of reading those books and BookFest was the ultimate reward. Her decision-making was logical. It was pretty decisive for an eleven year-old. She made her decision by weighing all the pro’s and con’s, but stuck to her instinct of what was going to make her feel nourished, and one might argue flourished. She did so knowing it might disappoint her chums and (potentially) her Dad — it didn’t — but she stuck with her core beliefs.

Claire left this morning at 7:15am on the school bus to Nanaimo to enjoy BookFest. I know she’s going to have an unbelievable time.

I learned a lot from you over this process Claire, and I want to thank you. You taught me that difficult decisions can be pragmatically delineated. You can reach a conclusion with humility and love. You can show compassion and unending concern while labouring over a final verdict.

I just want to say how proud I am, and how lucky we are to have you as our daughter.

And don’t worry, we will definitely make it to the Butterfly Ball next year. We might even invite your younger sister. 🙂

How I Nearly Ruined My Personal Purpose

In Honour of Ada Lovelace

An 8 Year-Old Does Social Learning