The ‘Empire Avenue’ Strikes Back

On February, 24, 2012, I decided to take another social networking site for a test drive.

This is a 48-hour play-by-play account of Empire Avenue because sometimes, you just never know what you’ll learn when you try something new for the first time.

For example, had I never tried beer as a 17 year-old, I might still be drinking strawberry kiwi wine coolers. (don’t ask)

What is Empire Avenue? According to the email I received after I signed up, it’s as follows:

At Empire Avenue you get rewarded for being social online. Earn virtual currency (Eaves) for whatever you do online and amass a fortune as you build your Empire filled with great people and content.

At first, I thought David Eaves had something to do with it, but I then came to my senses. I suppose no one individual could be responsible for all of that virtual money, could they?

Within minutes of filling out my profile (for the 3,148th social networking time, by the way) I had my first investment.

I’ve never met Paul, but he felt bullish enough to invest 2000 Eaves in me. Thanks Paul, although I must confess, I have no idea what you saw in me.

A minute later, user Jack Maus did the same thing. He was kind enough to also give me a ‘Shout Out’ which read:

Thanks Jack; my first ‘Shout Out’ was appreciated although to be honest, I couldn’t hear you.

Five hours later, my ‘share price’ had risen to over 15e (that’s game-speak for Eaves) and by Sunday night, my stock was listed at 30.74e.

As of this writing, and roughly 48 hours after my enrolment in Empire Avenue, my net worth was 127,000e and there were 58 separate people who had invested in me. (bless you, my shareholders)

What the heck does this all mean?

After 48 hours, I figured Empire Avenue to be a bit gimmicky, but the sure volume of immediate shareholders, messages and other social network interactions left me puzzled in a positive way.

Has Empire Avenue found a way to address social lurking?

Through the built-in game engine of a fictitious social networking stock market, users clearly seem to be engaged, participating and breaking down the interlocutor barriers. Although I didn’t utter a single ‘Shout Out’, nor did I invest in anyone else, nor did I do anything other than observe (I was truly a lurker) it really became clear that this Edmonton 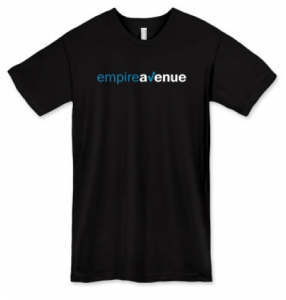 based company is onto something.

It’s not so much about the fake stock market.

Inside an organization, to achieve 100% social interaction, perhaps gamification needs to be a part of the actual social networking and social learning adoption plan. Perhaps it has to be built into the social tools itself, as a wrapper to drive engagement.

Some aren’t fans of Empire Avenue’s TOS whereas others see it as a fantastic self-brand and promotion opportunity.

I actually couldn’t care less. What Empire Avenue has done for me, however, is to rethink collaboration tools inside an organization from the perspective of a gamification tie-in.

My social experiment with Empire Avenue was a success. I’m not going to stick with it (sorry team, I wish you well) but I am going to ponder more about the link between social networking adoption and gamification.

Please Don’t Let There Be Anonymity After Death

I Unfriended You On Facebook. Are We Still Friends?

One Reply to “The ‘Empire Avenue’ Strikes Back”