Is George Siemens Right? Social Media is like Letters to the Editor

While I was enjoying a separation from the external world of social media this past summer, George Siemens of Athasbasca University, authored a very stirring if not controversial post entitled “Losing interest in social media: there is no there there“.

After finally dusting off my mental cobwebs and getting around to reading articles, research and blog posts that I missed over the summer, George’s post was, by far, the one that got me thinking the most.

At over 80 comments strong, (mostly professional, some venomous) it seems to have ignited a rather distinctive debate. Is social media simply used to emote, distribute, vent and network or is it also used to enhance the knowledge base and thus to further the cognitive depth of society? Is it substantive?

Let’s ensure we capture George’s points first before we proceed to my own thoughts and analysis. As best I can interpret what he argued, George suggests that:

In this vain, I agree with George. (mostly)

Shocking as that may seem, George is absolutely right. (mostly)

As it relates specifically to the manner in which George defines SM, it (social media) is akin to something we’re all familiar with: ‘Letters to the Editor’.

Whether in a newspaper, magazine, journal, etc., when someone from the public writes a retort to the original piece of knowledge or information, they are emoting through the ‘letter to the editor’. Their response is available for others to read. Their response is not furthering the original body of knowledge, per se. The opportunity to write said ‘letter to the editor‘ is open to all.

Emoting via social media is not intended to be a negative connotation. I don’t believe George thinks this either.

I might write a letter to the editor and reference a different body of work to compliment, debunk or refute. My referral, however, is more than likely going to be to another piece of actual knowledge, or my opinion, etc. not a Tweet, Google+ post, Facebook status update or FourSquare location check-in. Those SM entries are not bad; they are merely providing the flow to knowledge, not the knowledge itself.

My letter to the editor is written within the social flow of the moment. It is, perhaps, in response to something I personally hold dear to me; a topical activity or common interest is plausible too.

I don’t believe Social Media itself creates a movement.

But SM did not define ways in which to prevent future riots in Vancouver. That outcome came through the deep investigations, analysis, interviewing and final report. (download Part 1 and Part 2) Sure, the investigation team may have combed through troves of SM evidence, but they didn’t use SM to establish the original substance. (and yes, the outcome was then disseminated via SM for others to read, comment on, and so on)

SM did not initiate the uprising in Egypt. It also, however, did not define the new constitutional reform of the newly established government in Egypt. That was accomplished behind closed doors, privately, devoid of SM crowdsourced opinions and status updates or tweets, and then put to public referendum.

One cannot write a riot prevention manifesto or constitution by a ‘letter to the editor’.

So, in principle, I agree with George under the tenet of his very specific SM definition.

But Social Media is truly transformational because it helps further my personal knowledge base and arguably my personal level of competence. The social flow of my network’s updates, opinions, links and general chatter helps me to rethink my own opinions, my own thoughts, my own future ‘letters to the editor’ … but it does not improve the original body of knowledge. It does not create new works of knowledge depth outright.

This is where I take slight umbrage to a line in George’s post:

“What has social media actually done? Very, very little. The reason? Social media is about flow, not substance.”

Although somewhat paradoxically, I agree that SM is about social flow, but it’s also about the social flow of personal and/or professional networks and knowledge. It’s about connecting people to people and people to opinion, ideas and content. Social Media is a fast moving river helping us dock at the substance pier. Without SM, contact and network doors would not open as easily as they do with it. Those contacts and networks bring the original substance and body of knowledge to light where, without SM, the knowledge, contact or network may have lied dormant for years.

For many, SM provides the flow toward the knowledge itself. Without SM, many non-academics wouldn’t have the foggiest idea that the substance existed in the first place. This is analogous to writing a ‘letter to the editor’, but having nowhere to deliver it to. If there are no outlets, or I’m unaware that they exist in the first place, how can I write my letter?

Clint Lalonde’s Master’s thesis (The Twitter experience: the role of Twitter in the formation and maintenence of personal learning networks) articulates this point. (Clint’s Master’s blog site is here)

<Twitter> allows for a greater diversity of voices to emerge within the conversation on the network; conversations which are valued as important learning tools for the participants of this study. Additionally, the open nature of Twitter means these learning networks are now no longer confined to closed and private spaces, but are able to be open and public which increases the opportunities for collaboration, connections and learning opportunities.

… educators strive to build professional networks that includes both supportive peers and dissenting voices, whom they use to push their thinking. Using Twitter, these educators can access the collective knowledge of their peers, engage in discussions, debates, conversations, and participate in collaborative projects whenever and wherever they like.

To cement my position, I found out about Clint’s thesis through Social Media.

I’ve never met Clint in my life, but social flow brought me to his thesis. His substance.

In the end, I agree with George’s point of view in so much that Social Media (as defined by George) itself does not create the substance. I have extended his argument, however, to pinpoint my belief that SM greatly enhances our chances of finding the substance, and those that contributed to it in the first place through social flow. Therefore, Social Media has done a lot in its brief existence on Earth.

McLuhan said, “We shape our tools and afterwards our tools shape us.” Let us not fall into the trap that social media is a replacement for content depth, research rigor, or cognitive dissonance. 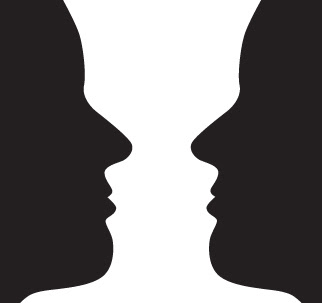 We need to see both the vase and two faces.

Social Media is not Social Learning

Should Employees Schedule Time To Be Social?