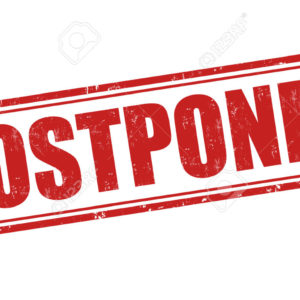 I’m Showing My Work … My Next Book Is Postponed

In her book, Show Your Work, Jane Bozarth encourages us to work in the open. On the topic, she recently wrote, “Working out loud takes us off autopilot and forces us to confront assumptions, bad habits, and prejudices. Helping others better articulate decisions helps them learn—and if we’re paying attention, we might learn something, too.”

John Stepper is another fabulous example of mastering the “work out loud” nascent meme. He even recently published a new book titled, Working Out Loud. He once wrote that, “You need to make [working out loud] purposeful in order to be effective.”

I’ve looked up to Jane and John for many years now (mostly virtually) as they have perfected the art not only of working out loud, but of building networks to increase their own knowledge and success. It’s been beautiful to watch from afar. For they are beautiful at working out loud.

Consider this entry about being open with my work. My other work.

When my first book, FLAT ARMY, published in May of 2013 I immediately began sketching, researching, and writing the next book. While FLAT ARMY was a book written to help organizations and leaders launch improvements in their culture and employee engagement practices through connected leadership, pervasive learning and collaborative technologies … I not only had the bug to continue writing, I wanted to delve deeply into the concept of purpose.

At first, I titled the book, “It’s Work Not Jail” and it was about 15,000 words in when I realized it was the wrong book. At the time, the target audience for the book was employees — not a bad thing — but I had an epiphany on a long bike ride. While I’d love to help the millions of employees out there directly with a new book on purpose (at least the thought of potentially helping them), I felt the concept of purpose was so delicately intertwined with employee engagement, that the target audience needed to shift.

Thus, the first book on purpose was mostly scrapped, and I started fresh. (or, perhaps I started over)

I recognized through more research, interviews, and personal reflections that purpose is in fact a two-fold process. First, the organization needs to define what its purpose should be. Second, employees need the resolute assistance of leaders to determine how they might evolve from a job or career mindset into what I believe is a ‘purpose mindset’. (Of course, the purpose mindset is aided and abetted by a more wholesome and stakeholder-driven definition of the organization’s new purpose.) This is why my next book is titled DUAL PURPOSE.

Since the Spring of 2013, I’ve written and rewritten this next book several times.

I’ve ventured into the memory vault of my own prior roles and organizations. I’ve researched till my fingers bled. I’ve interviewed many people — be it on the organizational or employee side of purpose.

In April of 2015, I finished the first complete draft. I did a little dance in the kitchen. Even the goats laughed at me.

Over the next two months, five different people read the book. Great comments. Insightful recommendations. Cheeky shots at my propensity for long sentences or made-up-words aside, the book was coming along. And then the paring began. It was 100,000 words and was being whittled down to something more manageable. An appendix was even created, so the flow of the book made more sense versus some of the stories that could be read almost anecdotally.

Prior to completion (in 2014 and 2015), five other people had read bits and pieces of the book. Again, fabulous feedback was received and incorporated into the book.

The cover was designed. I loved it. So fab!

I was getting ready to launch. November 10, 2015 was the chosen date. I could taste the anticipation of publishing another book, in hopes of helping organizations and leaders with this concept called ‘purpose’.

It was time for endorsements. I didn’t seek out endorsements for FLAT ARMY, instead choosing to define the words flat, army and flat army on the back cover. But for DUAL PURPOSE, I thought it was time to try something different.

Over the years I feel as though I have morphed into the world’s most fortunate aspiring writer. I have met many of the heavyweights and rock stars from the leadership and management space. Whether they have been CEO’s, consultants, ex-consultants, ex-CEO’s, academics, industry analysts, authors, broadcasters, and so on … I’m so lucky in some cases to even have developed a relationship.

I decided to call on one of them. The galley was issued. (galley is ‘book-speak’ for a not complete book) Some time lapsed. If the leadership and management space had some sort of articulated equivalent, in my mind, I was essentially ringing on the doorbell of Abbey Road, asking one of The Beatles for their approval.

Today, I got a response.

It was not positive.

At first I felt as though Lennon might have quipped, “You’re only playing three chords, and your G isn’t that good either.”

Gutted. For the entire morning I was not a member of Earth. My mind may as well have been on Mars, searching for water.

I got on an airplane. Then I got on another one. Before taking off on airplane #2, a flight attendant approached me in my economy class seat and asked:

“Would you like to take 3A in business class?”

So, I plopped myself in 3A and pulled out my iPad. I’m on a cleanse now, and although tempted by wine, I had the wherewithal to pass.

I re-read Lennon’s long and so very thoughtful email roughly fifty times. Each time I read it, my degree of hopelessness lessened and my sense of forlornness dissipated. The comments were structured and blunt but written in the spirit of making the book better. Lennon wasn’t trying to attack me; Lennon was attempting to help me make the book a much better book.

An offer of assistance was included. It was as though Lennon had asked an Indie band to jam with him for a period of time.

It doesn’t even pain me to write this, but DUAL PURPOSE will not publish on November 10, 2015. I don’t know when it will publish, but if Lennon thinks there’s a few more chords to utilize and songs to write, that’s good enough for me.

I’m working out loud. Thanks Jane Bozarth and John Stepper.

And thank you so much, John Lennon.

What John Lennon Taught Me About Thinking