Has Wells Fargo’s CEO Forgotten How To Lead?

There were audible gasps. Incredulous looks of dismay. Bemused shrieks.
Whether you are a customer, employee, shareholder or partner of Wells Fargo, no doubt your perception of the bank has suddenly taken a nose dive.
Ever since Wells Fargo was levied a $185 million fine by the Consumer Financial Protection Bureau (CFPB) for fraudulent employee behaviours of epic proportions—first reported by the LA Times in 2013—there has been an avalanche of opinion and outrage. According to the CFPB, employees of Wells Fargo “secretly opened accounts and shifted funds from consumers’ existing accounts into these new accounts without their knowledge or permission to do so, often racking up fees or other charges.”
I’m no banker, but this isn’t good.
The bank has terminated over 5,000 employees as a result of the fiasco, over a five-year period.
Furthermore, shareholders are now pushing the bank to investigate “whether the divestiture of all non-core banking business segments would enhance shareholder value, and whether it should divide into a number of independent firms.”
That is going to tie people up in senior roles at Wells Fargo for months.
But what this comes down to—as it always does in the aftermath of a PR disaster like with the Wells Fargo story—is an indictment on corporate culture and leadership practices.
Or in the case of Wells Fargo, a culture that exhibits disdain for employees and leadership practices that encourage power, competition and the setting of impossible performance targets.
Just this week in an interview with the Wall Street Journal, Wells Fargo CEO, John Stumpf, seemed to lay blame specifically on rogue employees, not the organization itself. Stumpf slyly suggested that the 5,300 employees that were terminated as a result of the scandal failed to put customers first or honour the vision and values of the bank.

“If they’re not going to do the thing that we ask them to do — put customers first, honor our vision and values — I don’t want them here,” Stumpf acknowledged. “I really don’t.”

Not once did Stumpf insinuate that there was a corporate culture issue at Wells Fargo. Not once did he or his C-Suite take responsibility for the unethical behaviours.
“Nothing to see here,” he might as well have added. “Just a few scallywag employees caught up doing the wrong thing at the wrong time.”
Senator Elizabeth Warren is right to demand that Stumpf “be held accountable for this [situation], as does the rest of his senior management.”
But so far, nothing is happening to senior leaders. So far, the culture seems to be staying the same at the bank. (aside from 5300 less employees) Michael Corkery of the New York Times, for example, wrote a ”bank spokeswoman declined to say whether any senior executives had been reprimanded or fired in the scandal.”
Ultimately, Stumpf is creating a competitive disadvantage for Wells Fargo. If you are a current customer of the bank, does it not make you think “why” you’re still with it? If you’re out there shopping for a new bank, does Wells Fargo shoot to the top of the list, now that you’ve discovered there may be unethical practices going on at the company?
In his book The Future of Work, Tom Malone states:

“As managers, we need to shift our thinking from command and control to coordinate and cultivate — the best way to gain power is sometimes to give it away.”

There is no doubt in my mind that there were (or perhaps are) hundreds and hundreds of managers, directors and vice-presidents—the chain of command—at Wells Fargo that cultivated a ‘command and control’ leadership style, pushing the now exited employees to behave unethically. The culture at Wells Fargo would not seem to be one that fosters a ‘coordinate and cultivate’ mantra. Otherwise, this debacle would never have occurred in the first place.
In my research and work, I have found that there is a causal relationship, a deep link between the way in which we are leading our organizations and how employees behave.
We need to recognize that yesterday’s way of leading needs to be improved but it will not happen unless we look at leadership in a way that incorporates more open concepts as well as the inclusion of people’s opinion and ideas. Today, many companies have leadership development programs. But, do those companies have an actual leadership philosophy that speaks to everyone in the organization, in a society that is shifting towards “cultivate and coordinate” and away from “command and control”?
The meetings will be endless at Wells Fargo going forward. The Senate hearings are one thing … but just imagine how much more effort is now going to have to be paid to developing a culture that does indeed put its “customers first,” one that can also be considered a competitive advantage.
Right now, its culture is a disadvantage. For that, I feel for its employees, customers and other stakeholders.
But if Stumpf continues to believe that the corporate culture of Wells Fargo wasn’t the root cause of various employees opening 2 million fraudulent bank accounts—unbeknownst to its customers—in order for them to increase sales, commissions and bonuses, he is as incompetent as a leader as I am a banker.
If he does not take responsibility for the state of its culture—committing to improving it in the short and long-term—there is no doubt in my mind, employee engagement will tank, customer satisfaction will continue to wane, and its financial results will suffer greatly.
It’s avoidable. It’s preventable. But any CEO must make culture its competitive advantage if it wants to do so.
UPDATE: I’ve had five former Wells Fargo employees email me. Each of them a) thanked me for the article and b) confirmed that the culture was in fact as I have described above. 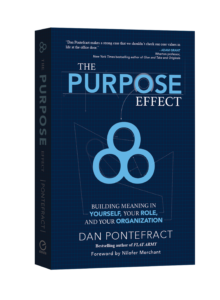 ____________________
PS. Read more in my latest book, The Purpose Effect: Building Meaning in Yourself, Your Role and Your Organization
Download Chapter 1 … for free!
Audible version now available, too. (I’m the narrator!)

Did Zappos Just Ruin Their Culture Or Is It A Brilliant Org Redesign?