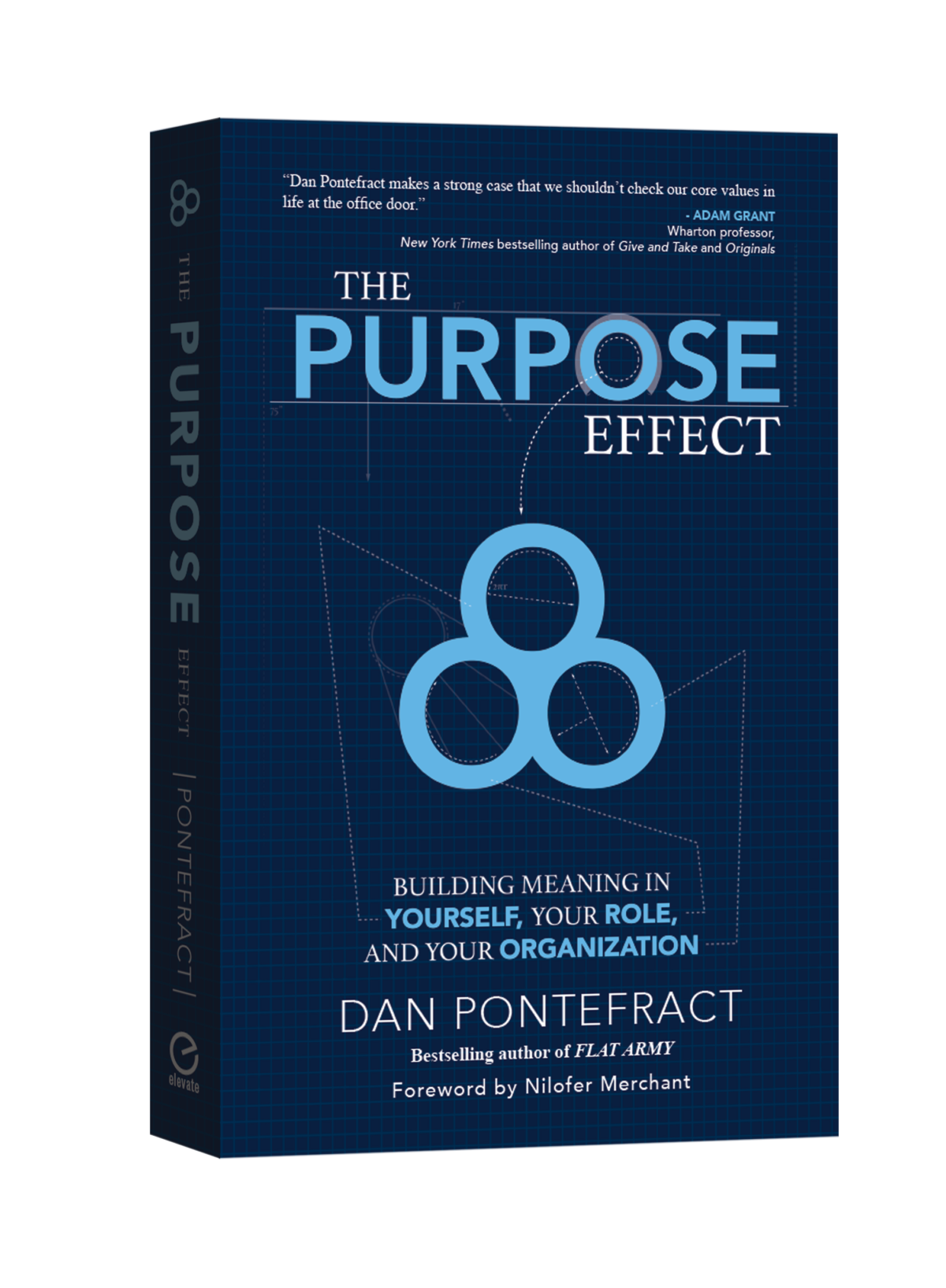 The Purpose of Work

Famed advertising mogul, George Lois, once said, “Most people work at keeping their job, rather than doing a good job. If you’re the former, you’re leading a meaningless life. If you’re the latter, keep up the good work.” To pay the bills, most of us have to work. The question we might pose, however, is whether work is merely a job or, with it, the possibility of a meaningful experience. Depending on your situation, work is either loved, liked, tolerated, loathed or treated with ambivalence. For certain, though, it is a guaranteed topic of discussion at any social gathering you attend. When attending any kind of dinner party, for example, how many times have you asked or have been asked the question, “So, how is work?”

Management expert Peter Drucker once said of the link between life and work:

“To make a living is no longer enough. Work also has to make a life.”

When work can in fact make a life, we know we are resting confidently in the sweet spot between personal, organizational and role purpose. But for a large portion of today’s team members, work seems to act as a stressor, the consequence of not finding one’s purpose in their role. Perhaps disengagement of team members stems from a lack of purpose in the organization itself.

I asked several people for their definition of work. Some interesting examples surfaced:

Engaging tasks that provide returns, such as monetary compensation, personal growth and meaning.

A purpose-driven series of mental and physical activities during which the collective learns and shares their learning with others.

To achieve something of substance.

It is evident from such responses that the concepts of meaning, purpose, achieving, engaging and collaborating comprise the patches for an intriguing quilt of definitions. What does your own quilt say about work? What does your definition of work say about you? Do you define work — both the place you are employed and the profession that makes up your trade — with words like flourishing, meaning, well-being, balance, community, giver and purposeful? Are you viewed as someone who cares about the purpose of the organization? Does your organization bring purpose and meaning to all stakeholders in its operating mandate and mission?

Or, perhaps, you think of work as a quest to climb the career ladder, judging success by the improvement of your title, remuneration level and the number of direct reports you are in charge of. Is work the quest to assume greater power? As American journalist Robert Quillen once wrote, “By working faithfully eight hours a day you may eventually get to be boss and work twelve hours a day.” Is your purpose solely to become the boss?

Maybe you view work merely as a paycheck; a means to an end. Maybe work is solely a job leading to a state of individualism. In 1831, French historian Alexis de Tocqueville referred to this state as, “A calm and considered feeling which disposes each citizen to isolate himself from the mass of his fellows and withdraw into the circle of family and friends; with this little society formed to his taste, he gladly leaves the greater society to look after itself.” If the organization’s purpose creates isolation, loneliness or a sense of individualism, will a team member ever achieve purpose in their role? What about in their life?

Perhaps work is the fixation on profit. If you are a private company, profit is important and necessary. Without profit there is no business. But the question a company needs to ask itself is whether or not it is solely focused on profit (or shareholder return, in some cases) rather than serving the interests of all stakeholders. Recall Fairphone’s example: as a private company, it seeks to make a profit but not at the expense of its overarching purpose.

If you are working in a not-for-profit or public sector organization, are you operating in harmony with the board, regulators or fellow team members? Take for instance the United States Government. Each year, the United States Office of Personnel Management aggregates employee engagement results from over 48,000 offices, across 82 federal agencies. In 2014, almost 400,000 workers participated in what is known as the Federal Employee Viewpoint Survey, or FEVS.

Since 2010, job satisfaction is down eight percentage points to 64 percent. With almost three million workers in government, that’s roughly one million people who are unsatisfied in their roles at work. Other data points demonstrate continued “wear and tear” on engagement levels of employees. Only 52 percent of workers, for example, believe their management does an effective job at encouraging communication and collaboration. That correlates to only 55 percent of all U.S. government employees being satisfied with the organization they work for itself.

Judging from global employee engagement surveys — where levels of internal employee engagement continue to remain anemic — well over three-quarters of those employed on the planet do not find meaning in their work. Some of this blame falls squarely on the individual, for certain, but organizations devoid of true purpose and senior leaders fixated on power or profit do nothing to help the current plight of the purpose of work.

At its root, work is a means by which we get paid to partially satisfy what Abraham Maslow defined in 1960 as the Hierarchy of Needs. In particular, when we are paid for performing at work, we can utilize the funds we are remunerated with to satisfy such physiological and safety needs. It can also include personal requirements such as financial, economics, property, goods, food, drink, well-being and health.

But the workplace is not solely a place to be paid, is it? Some argue that team members merely rent their skills to an organization in return for compensation. Might the other three components of Maslow’s thesis (belongingness, esteem and self-actualization) be incorporated into the way work ought to be conducted? Perhaps this is when a team member reaches the sweet spot. Perhaps “purpose at work” occurs at a state of what we may refer to as workplace actualization.

If work is to make a life, as Peter Drucker suggested, the purpose of the organization might need to shift to include a greater degree of meaning. If this occurs, perhaps more team members will be able to feel a sense of purpose in their roles as well. If this occurs, I would like to argue that work can also then make a life. Perhaps at this point there may be a link between self-actualization and workplace actualization.

Is this the purpose to purpose? 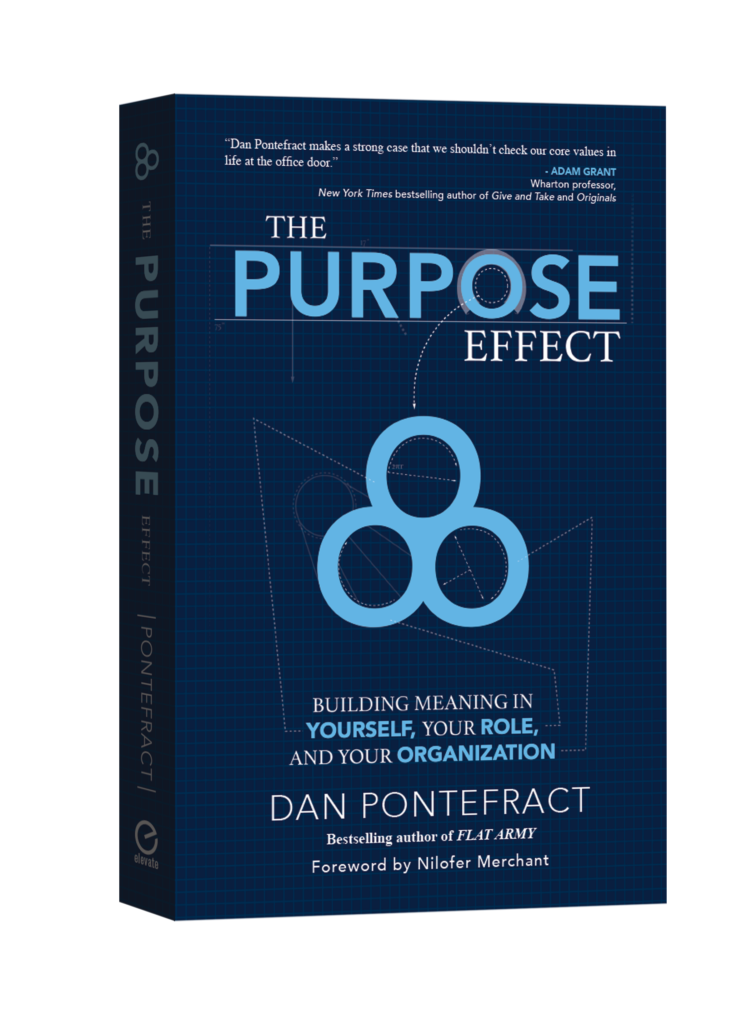 Dan Pontefract’s next book, THE PURPOSE EFFECT: Building Meaning in Yourself, Your Role and Your Organization, will publish May 10, 2016.