Seeing as it’s been almost 3 years since I’ve been with the likes of Facebook, LinkedIn and Twitter (at various entry dates) I thought it would be interesting to analyze my own personal / professional network to understand if any trends might be occurring. Secondly, I’m using this analysis as a basis to personally reflect on the importance of such tools being made available inside an organization to facilitate a ‘culture of collaboration’.

First, to the data.

If you take a look at the following pie graph (click for larger view), you first need to make note of some context points: 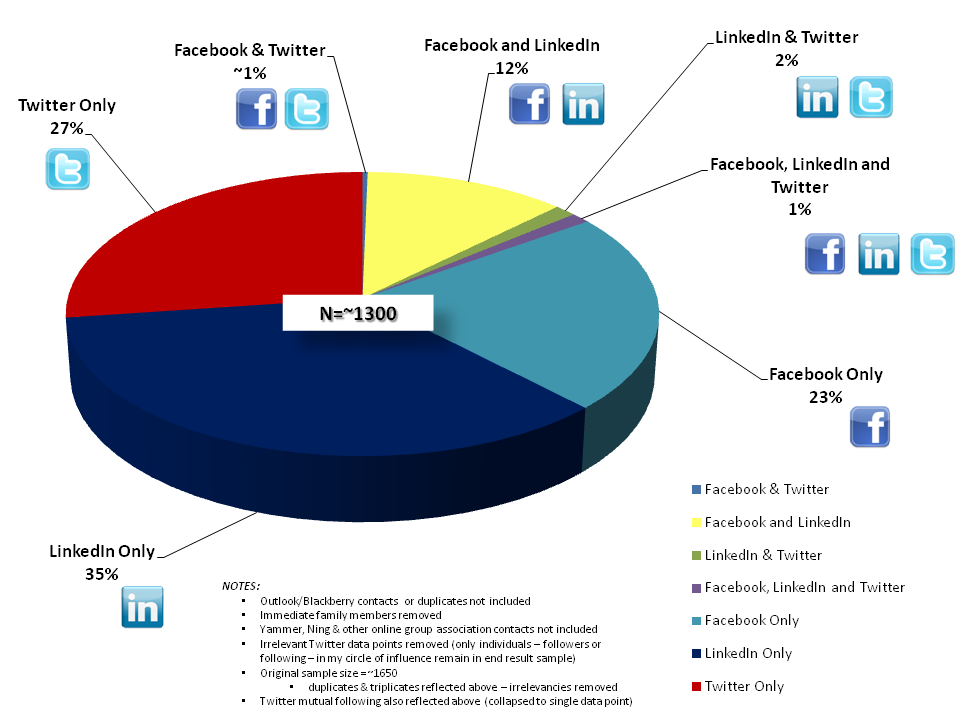 Alright, what have I observed?

Implications for the Org?

I think it’s fair to say that the sample size of ~1300 is stastically significant for purposes of juxtaposing against the organization of tomorrow.

Facebook is a place where I can share knowledge, photos, videos, a bit of lifecasting, documents and even engage in live chats, etc. This is social learning at its best from a personal perspective but throw this into the mix in the org, and you have something very powerful that’s brewing and only going to taste like a fabulous English Ale in the future if implemented and deployed properly.

LinkedIn is much better at the ‘who am I’, and ‘how can I help’ aspects of social networking … as well as the obvious network contact control mechanism. This too is something critically required in an organization through both hierarchical team structures as well as heterarchical/wirearchical teams or communities that come and go through the natural evolution of projects, ideas, and actions in the org.

Twitter (albeit relatively new versus the other two) provides a much deeper way of sharing concise pieces of knowledge, links, ideas, comments and ‘what am I up to’ that is important to have in the organization as society moves away from the physical water cooler, to the virtual water ‘schooler’.

Mix in the standard practice of wikis, blogs, federated search (including formal learning assets via a hidden LMS somewhere) and voila … you have the Social Net-Work-Life Balance an organization needs to drive a ‘culture of engagement’.

In summary, we need tools like Facebook, LinkedIn and Twitter in the organization (not these ones specifically), but ideally (and somehow) federated with the other tools already in place, or being thought about for the future. Culturally, this is the right thing to do for tomorrow’s workforce.

Thoughts on either my data points, or the latter org points?

I Unfriended You On Facebook. Are We Still Friends?

One Reply to “Social Net-Work-Life Balance”