I Wrote a 90,000 Word Book Entirely in Evernote 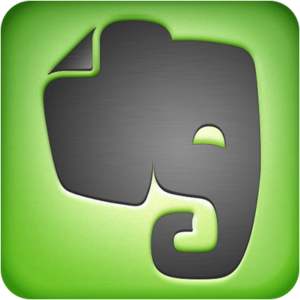 When I started the quest of writing my first book — aside from the instant classic I wrote as a 9 year-old that detailed with intricate depth the entire universe of Star Wars droids — I debated how to actually write it. I’m a digital packrat; I collect academic studies, documents, quotes, words, sites, books, articles and emails. Over the years, my file folder and email storage system of personal digital artifacts has shifted to Evernote and Dropbox with a splash of other cloud based services.

If it were 2007, I might have written the book entirely in Microsoft Word. I would have sketched out the book in Word and flipped between chapters with an incessant number of CTRL F actions, PG DN and PG UP keyboard strokes alongside a black-belt level of styles and embedded links and shortcut view changes.  I would have become a book writing Word ninja. In hindsight, I may not have actually finished the book. Being an early adopter of Evernote (since late 2008) I found it quite easy (and preferable) to write the book entirely in Evernote. That’s 90,000 words all nested nicely in this cloud-based service.

The ‘why’ is easy. I used Evernote because of these key features: access, snippets, notebooks & layout and search.

The ‘how’ requires an explanation of the ‘why’.

From a search perspective, I must have searched roughly one million times within Evernote phrases, words, documents and tags to see if I had written something previously or where a phrase, paragraph or snippet might be in the book itself. I searched the works of others that I store in Evernote as well. There was no needle in a haystack; search is simple and afterword, you can easily navigate back to where you were writing in the first place.

The layout of Evernote is both art and science. We might use a metaphor to help explain how cool it is. Notebooks are large filing cabinets that can contain folders of text, photos, etc. The ‘folders’ are where I would store pieces of each chapter, research, quotes, interviews and so on. I had one Notebook for each chapter, and others for larger containers worthy of a notebook but not a chapter outright. Words/Grammar was one of the non-Chapter notebooks, for example. As the chapters came together, I would/could easily shift pieces here and there in a single view. No major scrolling or switching documents at any time was necessary.

When using a web browser, you have the ability to grab snippets of text, photos, etc. from web pages. I did this a lot. After ‘snipping’ you are presented the option of storing the content in a particular notebook.   This is truly handy when doing research and saves an immense amount of time as opposed to the ‘copy and paste’ approach that would have to be applied in other editors. (Although I do think the words snip and Bobbitt will forever be linked) 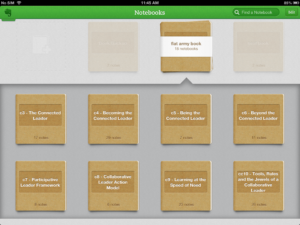 Finally there is access. For the record, I wrote the entire Flat Army book on five different devices in myriad locations. There were two laptops (Mac and PC), a Blackberry Torch, iPod Touch and an iPad. (iPad screen shot to the right … PC screen shot above)

I wrote in taxis, planes, helicopters, float planes, trains, ferries, cars, trucks, bus stops (and busses), kayak (I’m serious), restaurants, the Wolf and Hound Pub in Vancouver (a lot), houses, lounges of all sorts, poolside, curbside, bed, couch, stools, cycling (once – it’s not safe nor recommended), spinner (this is much safer) as well as while playing street hockey.

I like to think of myself as an ideas guy. My mind is constantly racing. It drives my better half completely nuts. But when you decide to write a book, these ideas need a home and the best way to write them down — in part or in full — is Evernote. It became a continuous brain dump of my thoughts and concepts … and wherever I was between May and October 2012, I was writing. It might be a short thought or it might be 1500 words. I always had a device with me of some sort, so it was easy to be perpetually writing.

Some people have asked me, “was it hard to write the book” and “how did you find the time?”

I don’t want to sound arrogant or come off as some dimwit wannabe author, but with Evernote, I found it to be — relatively speaking – easy to write the book.

And no, Evernote did not pay me to write this. And yes, I use the paid Evernote Premium service. You should too. (I’ll call it a business expense)

PS. I wrote this post entirely in Microsoft Word.

In Defense of Alexandra Samuel

Budgeting for Learning 2.0: It’s Not That Hard