At Apple’s most recent product launch in Cupertino — where Apple Watch, Apple Pay and iPhone 6 (oh, and iPhone 6 Gigantic) were flaunted about like the Halloween parade I took part in at my elementary school every October as a child — a wonderful culture moment took place on stage.

No it wasn’t what the Internet is referring to as Apple Scarf Guy. (Although according to Zara, male scarves are now sold out, literally, across the planet.) 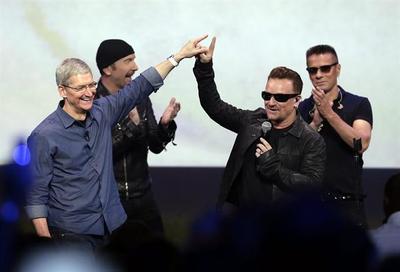 no, it wasn’t those three Irish lads from Dublin (and an Englishman) showing up on that same stage (clad in leather looking like a biker gang from Holland) singing something about Joey Ramone. They even managed to give away their new album free via iTunes to over 17 billion people. (I may have rounded up.)

That did give me an idea to give away my next book — for free — via Amazon. After checking in with Amazon though, they informed me I’d have to wear leather pants and a scarf for a year, so that’s out, for now.

For fashionistas out there, I’m sorry to disappoint, but it has nothing to do with Tim’s decision to un-tuck his shirt either. I must admit, I wondered to myself if ex- Burberry CEO Angel Ahrendts — now Apple’s lead on all things retail and online stores — might have whispered into his ear just before show time,

“Tim, un-tuck that shirt or I’m jumping ship to

JC Penney or Target or Sears or any other retailer that is imploding.”

No, Tim’s culture moment was simple yet profound.

He recognized his team in a public forum.

You probably will stop reading now. After all, what does employee recognition have to do with culture let alone knowing when the next full moonrise is about to occur? (Oh the pending charm of Apple Watch) 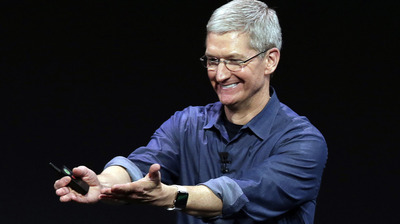 the three product launches concluded on stage, Tim paused ever so slightly, and what seemed unscripted (at least I hope it was unscripted) he asked all Apple employees present in the auditorium to rise up from their seats.

With a round of applause initiated by Tim, he thanked everyone for their hard work, their creativity and their commitment to the launch and everything leading up to the day.

This is one of the most important traits a leader — let alone the CEO of the world’s most famous fruit company — can demonstrate and act upon. Failing to recognize your employees is akin to eating sushi without soy sauce and chopsticks. When Tim took a brief moment to say thanks in front of that auditorium — and in front of the 23.4 billion people tuned into the live stream — he said to me, “My leadership style is inclusive, timely and one that supports recognition of the employee. The culture at Apple is becoming one that is open.”

After a dizzying display of jumps and high kicks by U2 front-man Bono concluded (wait, wrong decade – it’s not 1985) and the somewhat awkward announcement of a free U2 album, Tim stood alone in my mind. I’ve been publicly critical of Steve Jobs in the past, regarding his alleged and documented bouts of bullying and various “leader of people” malpractices at Apple.

When Mr. Cook decided to publicly recognize the Apple team and their performance — when he demonstrated his moment of open culture — he became more than a CEO.

He became a Chief Engagement Officer too.

(And for what it’s worth, I really like the song ‘Every Breaking Heart’ from the free U2 album. Don’t judge.)